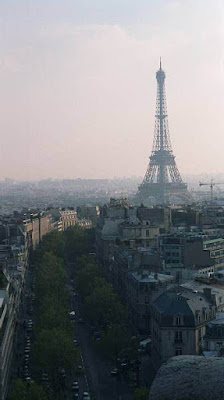 The pic on the right is from 1999. I believe I took that picture from the top of the Arc de Triomphe.

That was my first trip to Europe and I met my brother Lewis for the first time (long story) on that trip. He's British and when we visited Eton near the Windsor Castle, I was struck by the beauty and told my brother "I could live here". Little did I know that I was only a few years away from being able to do that. When I moved from Nottingham to London in 2007, I briefly toyed with living in Eton, just because I could.

And now, by this time next week, I'll be living in Paris (well, Les Lilas, a suburb of Paris). This might (again) interrupt my posting schedule, so be patient.

I'm going to miss Amsterdam and I'm frankly a bit pissed off that we're in a position where the move in needed, but life goes on. My new job is great and, damn, France! We're just about finished packing. My wife is in Paris for three days now to take care of a few things with our new flat and then we move on Friday.
Posted by Ovid at 7:59 AM