Saintes-Maries-de-la-Mer is a small town on the southern coast of France. It's also the capital of the Camargue region, Western Europe's largest river delta. It's a lovely area famous for its horses, flamencos, and vicious mosquitos which could probably exsanguinate a cow were they not so busy draining my wife, daughter, and myself of blood. I have welts all over me and they're nothing compared to what my wife has. And that was with mosquito repellent. Missing the slightest bit of skin with said repellent is not a good idea.

That being said, it's a gorgeous area with — like most of France — a rich history. While our flat in Paris was being robbed, we were relaxing on the beach and enjoying the beauty of the Mediterranean while our friend David told us a bit of the history of the Saintes-Maries-de-la-Mer. The name of the town means "the Saint Mary's of the Sea". According to local legend, the three Saint Mary's (of the Catholic religion), after witnessing the empty tomb of Jesus, fled the Middle East on a boat and sailed across the Mediterranean before arriving at Oppidum-Râ, the town now named Saintes-Maries-de-la-Mer. 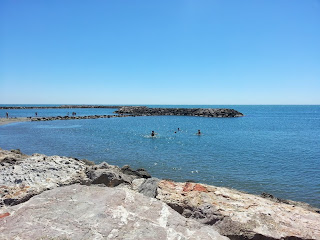 For those who are interested in Catholic history (particularly of the Dan Brown type), the legend states that when the three Mary's "fled" in 42CE, they were accompanied by a dark-skinned girl named Sarah, today known as Saint Sarah. She's the patron saint of the Roma (popularly known as "Gypsies"), but more importantly, some believe her to be the daughter of Jesus Christ and Mary Magdalene. This idea is explored more fully in the book The Woman with the Alabaster Jar. To me, the idea of Jesus having children isn't particularly surprising or even noteworthy, but for some Christians, this is blasphemy, though the recently discovered papyrus which hints that Jesus claimed "Mary" as his wife is certainly intriguing.

As is always the case with towns like Saintes-Maries-de-la-Mer, it's a tourist town. It doesn't feel like a tourist trap, though. For example, witness the photo on the right. That's La Pequellette (a local word meaning "the little girl"), a small restaurant facing the sea. For the experienced traveler, when you look at something like that you know to stay far away. The food will be cheap and the prices dear. In this case, the exact opposite was true. The food was wonderful, the portions huge, and the prices far lower than what we would have paid in Paris. TripAdvisor reviews make it clear that this is normal for La Pequellette. What an absolutely delightful surprise.

While we were staying there, we came across this old photo, blown up and hanging on the wall of the house we were at. It's a lovely photo and we're quite curious to know its origin. We've never seen it before and a reverse image search at tineye.com has turned up nothing. Anyone recognize it?

In any event, we're now back in Paris and our home is the site of a robbery that is curious, to say the least. The intruder(s) turned the place over, emptying drawers and making a mess. And what did they take? A 17 inch Macbook in plain site was left untouched. An expensive Hermes bracelet? Untouched. My wife's pearls? Untouched. Unopened bottles of top-shelf liquor? Untouched. Passports? Untouched. In fact, there were plenty of things lying around that were worth money, but they managed to take one thing that really mattered: my wife's wedding ring. As far as we can tell, the only thing they took was that and a cheap pair of cufflinks. We'll keep looking to see what may be missing, but so far, I'm mystified.
Posted by Ovid at 9:18 AM