This Swedish Jobs Web Site Is a Bit tvivelaktig (questionable)

Note: there is a company in Australia named Swede Recruit. This post is not about that company. If you really want to get a job in Sweden, I explain the process here.

There are many people desperate to find work in other countries. There are, sadly, many others who are all too happy to take advantage of this. You'll find plenty of "we'll get you an overseas job" sites with dodgy credentials and it looks like there might be a new one in Sweden, apparently run by one "Simon Nordin, CEO".

It seems "Ecothegeek" on Reddit had his CV on Eures, the European job portal, and a company contacted him saying that they'd like to find him a job in Sweden for the low price of €195. Ecothegeek was a bit concerned and asked about them on Reddit's /r/IWantOut community. Something didn't seem quite right to me, so I started digging.

Called swederecruit dot com (not linking to avoid giving them traffic) and claiming on their Web site to have been doing business since 1998, they registered their domain a few days ago and launched their grammatically-challenged Web site (my favorite is the "Get a Work" link). It's possible that they're simply a brand-new company hoping to make themselves look mature, or maybe they're established international recruiters who inexplicably forgot to get a Web site for 15 years.

From their About Us page (emphasis mine):


Swede Recruit founded in 1998 and since then has given people and businesses to develop by being a caring, responsive and solution-oriented agencies.

We offer solutions for staffing, recruitment and outplacement. Our clients are among both private and public companies and organizations.

We at Swede Recruit make it as smooth as possible for our graduates to find jobs that suit them perfectly and as easy as possible for a recruiting firm to find the right employees . We believe that everyone is the right person in the right place, anywhere in the world. It’s just about finding the right. Here we come in and help.

We have put a focus on being a helping hand to job seekers from other countries who are looking for work in Sweden. We provide a large number of apartments for our job seekers to make it easier to make the move to Sweden.

And here's their Apply page (emphasis mine):


Below you can apply for a job, an apartment and a work permit in Sweden that guarantees you an optional work and an optional home. When you apply for this you will receive a letter via email on how to complete your payment.

For us to be able to process your application, you need to pay the administrative fee of 195 euros. The process goes through a work permit, an apartment and a job for you.

Within three months, we will introduce alot of job alternatives for you and a nearby apartment. After you have decided which job and which apartment you want as we have suggested to you, you will get your work permit in Sweden. Then you are welcome to your new job and your new apartment.

If it turns out that you are not satisfied with the jobs and / or the apartment that we present to you within three months, we can at your request, keep searching or refund the full payment to you.

For your and our success, we provide only the work that is under swedish and union standard salaries. Swedish average salary is 29,000 SEK (about 3,100 euros).

Wow. That's pretty impressive. €195 (~$270 US) and they'll provide you with alot (sic) of job alternatives and an apartment!

So why do I think something is odd? Well, I've been researching expat issues for a long time and my wife and I run an international IT recruiting company, so I think I have some experience here. You generally don't just pay some money and get a work permit. Sweden is still struggling with unemployment, but as it turns out, under a 2008 change in their laws, virtually anyone can get a work permit in Sweden if they can convince a company to offer them a job. So maybe this site is legit?

So I dug into their Web site. First: 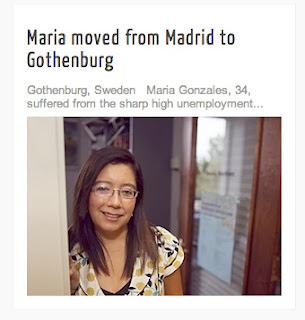 This is not a smoking gun and there could be explanations for why a 15-year company handling international recruitment would not have had a Web presence prior to a few days ago. But let's look further.

According to their Web site (/maria-moved-from-madrid-to-gothenburg/), Maria Gonzalez is a 34 year old Spanish woman who used their services to find work in Gothenburg, Sweden. They have a short interview with her where she explains how easily Swede Recruit found her a job and an apartment. Maria sounds very happy.

Except that the image they used is actually that of Rebecca Martinez, an assistant professor in Women’s & Gender Studies at the University of Missouri.

Well, OK. Mistakes happen. Or maybe Maria didn't want her photo taken so they made do with what they could borrow from other Web sites. Or maybe they just lost Maria's photo? 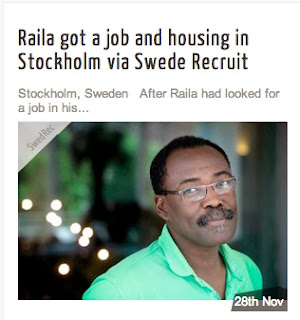 And then there's the happy tale of Raila (/raila-got-a-job-and-housing-in-stockholm-via-swed-recruitment/). He struggled for two years to find a job in his native Kenya, but Swede Recruit found him a lovely job as a café assistant in downtown Stockholm.

Apparently they lost Raila's photo too, so Swede Recruit repurposed the photo of Mahamat-Saleh Haroun, a film director from Chad.

Again, no smoking gun here. Maybe they just keep forgetting to take photos of the people they help.

So are their any real photos of people on their site? Sure! They have a staff page. I took a screenshot in case they accidentally lose these photos too. 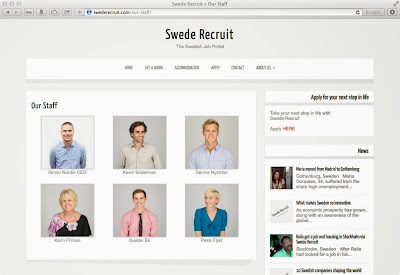 Those people are:
And in the mother of all coincidences, it turns out that Guillaume Cailleux, Chris Carver, Adam Finck, Laura Walker, Zachary Barrows and Liz Allen, people who work for the charity invisiblechildren.com, are all dead ringers for them, right down to the clothes! Weird, eh?

Psssst, Simon: didn't you know how trivial it is to find out if an image on the Web is used on another site?

Oh, and Swede Recruit doesn't appear to be registered as a Swedish company. Scambook already has an entry for them and the company registry number that people claim Swede Recruit is using is false.

It appears that Simon Nordin, the "CEO", or someone using the name "Gustav Ek" (see above), was actively contacting people via Eures, the European Job Mobility portal. In fact, it looks like they may have mass mailed people on that Web site, trying to get people to pay €195. However, Eures is now calling Swede Recruit a fake company and under Swedish law, to qualify for a Swedish work permit, the job must be listed on Eures.

I contacted him under a fake name and said I couldn't apply because I didn't have a "Eures ID" (a "required" field on their "Apply" form). Someone named "Simon Nordin" replied:

You need to register at our site and pay the administration fee to take part of our services.

Then when I checked the "Apply" page again, someone had removed the field requiring a Eures ID. I filled in my information and was sent a link to a PDF with Mr. Nordin's IBAN, and BIC/SWIFT information for transferring the money to his account. Strange that a 15-year old company would be using the CEO's personal bank details rather than their own (though I have to say, if this entire thing was set up just to make Mr. Nordin look very stupid, someone's done a brilliant job and I should be apologizing to Mr. Nordin).

Further digging turned up Mr. Nordin relatively quickly. He's probably a young man around 18 to 20 years old or so, possibly living with his mother. I found plenty of contact information for him and his family and a friend in Sweden offered to contact the boy's family for me, and he did. The boy's aunt and father have allegedly been contacted and from what I understand, the father said they'd get down to the bottom of this and go to the police, if necessary. I've made several attempts through different channels to contact Mr. Nordin to get his side of the story. Neither Mr. Nordin nor his "company" have responded to me. If you complete the "Apply" form, the Web site is still sending out "order confirmations" asking people to send him money.

I work hard trying to help people legitimately find work in other countries and it saddens me to see something like this. Perhaps Swede Recruit is simply a very unprofessional company that doesn't understand that misrepresenting themselves like this is wrong. I would suggest ignoring them and keep reading this site. I don't charge you a damned thing.
Posted by Ovid at 2:16 PM