Who is moving where?

No "expat" blog would be complete without finding out who is moving where. Much of the data for this is publicly available, but peoplemov.in is trying to create an "interesting" visualization of this data (fair warning: you must have a modern browser which supports HTML 5).

Right off the bat we see that an estimated 3.15% of the world's population appears to be comprised of expats. That's a huge number, though I don't know if those numbers are adjusted for immigrants who later leave. If you have a modern browser, you can click on the country code on the left hand side and get a pretty graph showing which countries people from the left hand country emigrate to. 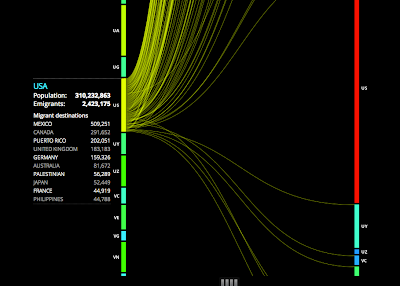 While I think the site is pretty and I like the information it presents, unless your monitor's resolution is 1,280 by 10,000, all of the scrolling back and forth will be annoying. Of course, using 2 letter country codes instead of full names on the bars is also pretty annoying. I have to deal with those codes all the time at work and I didn't know off the top of my head what VG (British Virgin Islands) and WS (Western Somoa) were.

Still, it's useful putting this together and I'm going to have to download the raw data. We can see overwhelmingly that the top places Americans emigrate to are Canada, Mexico and Puerto Rico. I suspect this has as much to do with the lower costs involved as legal ease of access, but perhaps when I download the data, I'll have a better idea why people move to various countries instead of just where they are moving to. In the meantime, check the data out. Maybe it will give you some ideas.
Posted by Ovid at 7:39 AM

Email ThisBlogThis!Share to TwitterShare to FacebookShare to Pinterest
Labels: destinations