A Touch of Parisian History

Clicking on the photos will display a larger version.

My mother-in-law is down from Calais, visiting, so we've been out and about quite a bit lately. We recently went walking around Le Marais area of Paris and had a lovely time. We had been their previously with friends, eating at L'As du Fallafel and discovering that it really is some of the best damned falafel on the planet: and dirt cheap, too.

I think having a group of six and with a toddler helped us waltz past the extremely long line.

This time, though, there was no mission for "the best falafel on the planet". Instead, it was just wandering. I was delighted to get this photo: 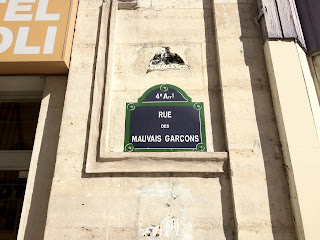 That's the street sign for the Rue des Mauvais Garçons, or "Bad Boy Street". Some assume the name is due to this area of the Marais having a strong gay scene, but no. Apparently the street was originally named rue Chartron, back in 1300, but changed to a variation of its current name in the 1500s. Allegedly the name stems from the fact that some of the people who lived their were fairly rough and apprentices of local butchers.

However, the French also used the term Mauvais-garçon for other reasons:


In the sixteenth and seventeenth centuries, but also in previous centuries, the "bad boys" were armed gangs, often thieves, mercenaries, lansquenets and demobilized reîtres who terrorized the town and countryside.

In other words, the Mauvais Garçons may very well have been a disreputable area where brigands hung out, or lived. Mind you, that's idle speculation on my part, but the timing of the name change is right.

Of course, there are plenty of lovely pubs in the area. 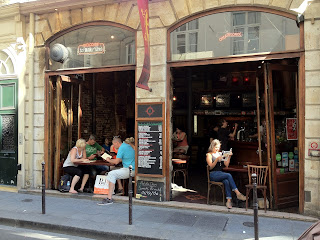 And this fountain quite popular. 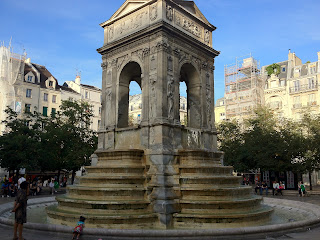 And our daughter found it delightful, even trying to climb in. 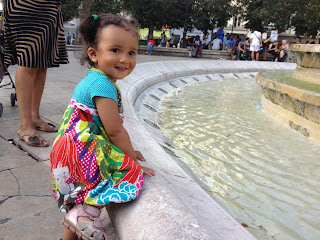 The next two photos are from my morning walk to work. I sometimes divert slightly and walk through the Parc des Buttes Chaumont. 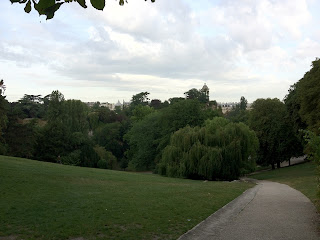 The views from the park are astounding. I need to come down here with a proper camera some day. 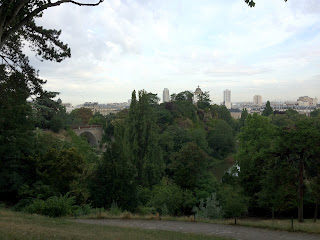 Later we wen't down to the Seine River and enjoyed the Paris Plage (though these first two photos are a couple of weeks old). Once a year, a bunch of sand is brought into Paris and the Seine River is temporarily transformed with beaches and palm trees as relief for those Parisians who can't leave the city during the traditional August holiday. It's proven to be a very successful event. 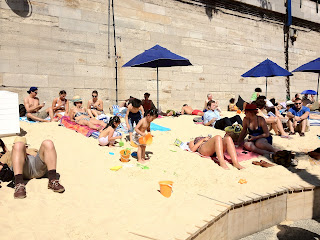 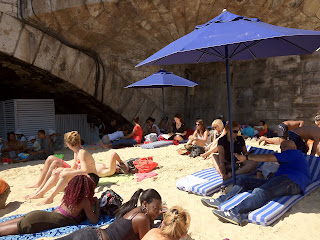 Last night I headed down to meet my wife and mother in law for a night of dancing and drinking along the river bank. 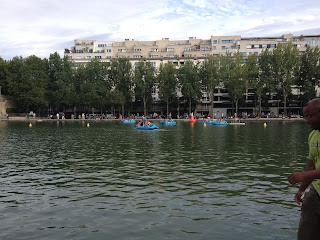 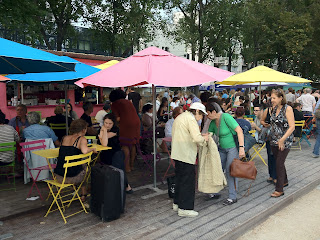 And a final shot of a Parisian canal. 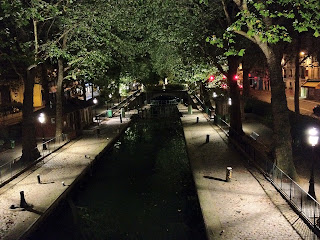 It's really a gorgeous, gorgeous city.
Posted by Ovid at 10:48 AM